An Open Letter to Greg Clark

Let’s be frank. Brexit is a complete mess. You and I both knew this a long time ago. The government's Brexit withdrawal only confirms that the Brexit fantasy is collapsing under its own contradictions.

Greg - in your heart of hearts do you genuinely believe that the PM’s agreement is in our best interests? Be honest - do you really think your government’s arrangement is better than our current EU deal?

In 2016 we both campaigned to Remain. We even managed to put a Lib Dem sticker on you! You were ardent in your beliefs that we were stronger in the EU. Two years later what has happened to that Greg Clark? I am surprised that you have had this extraordinary change of heart!

My question to you is: why put yourself through selling something you clearly did not and possibly still do not believe in, especially when your own constituents voted against Brexit? As business secretary, you are also no doubt very aware of the catastrophic consequences that a bad Brexit could have on business and commerce.

My belief is that you should free yourself of this predicament by leaving the government and, instead, put all your energies in to campaigning to give all of us the final say. By staying in Mrs May’s government you are complicit - I use the word advisedly - in making Brexit your unwanted gift to your constituents.

Here are 5 reasons why you should support the People’s Vote:

1. The referendum was not free and fair. There were lies. Turkey is not joining the EU and in any case the UK would have a veto. Leave donor Arron Banks is being investigated by the National Crime Agency. He is innocent until proven guilty but, should illegal foreign money have played a part, then the legitimacy of the result must be questioned. Do we really want to go ahead and reward liars and possible cheats?

2. Voters were not well informed about the reality of Brexit. Of course, leaving the EU was on the ballot paper but what does leaving look like in reality? It wasn’t clear back in 2016. It was only last week, two and half years after the original vote, that the Brexit deal was, in part, revealed. By giving the people a vote we are allowing them to make an informed decision on the facts - not the fantasy mis-sold by Brexiteers.

3. The promises of 2016 have not been met. The backlash against the PM’s deal from Leavers and Remainers alike has only increased divisions. It satisfies neither side of the debate. If Brexit à la Theresa May is such a good deal for the UK, surely residents will endorse it again!

4. The country is allowed to change its mind - democracy should be an ongoing process. What looked like such a good idea in 2016 is now in doubt. People are, quite rightly, having second thoughts. I am sure you will that seen the recent opinion poll in Tunbridge Wells showing that the pro-Remain majority has actually increased since the referendum. Surely you were elected to represent the views of your constituents!?

5. Brexit will be your legacy to Tunbridge Wells. Despite our differences, my genuine belief is that you went into politics because you wanted to make a difference. I cannot understand why you are so determined to be an architect of a project which will make things worse for all of our residents? Please search your conscience and make the right decision.

Your constituents, whether Liberal Democrat, Conservative, Labour or of no political affiliation, deserve to decide whether your Brexit agreement is good enough.

Mr Clark, can we - your Remain constituency - count on you at this time of national crisis? 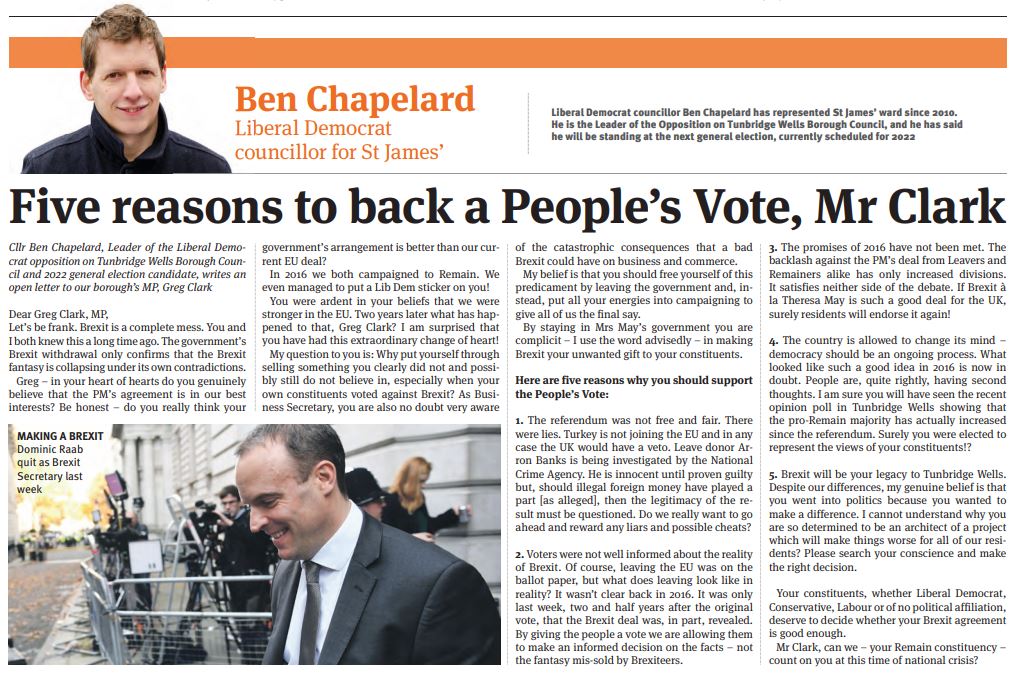