Disappointingly, Chris Hall lost by 8 votes in Broadwater, winning 39% of votes cast and Rachel Sadler came a close third in Park with 23% of votes cast.

The Liberal Democrats thank everyone who voted for our candidates together with all of our supporters who spread the word about the work we are doing in Tunbridge Wells. Finally, we want to thank our candidates themselves most of whom did a lot of the leg work themselves. 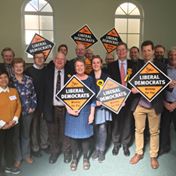